The Passage of Time: Dating the Prehistory of Southern China and Southeast Asia 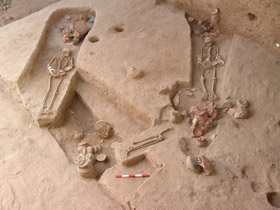 This photo shows the four phases of burial at the site of Ban Non Wat, Northeast Thailand. There is an early Neolithic Jar burial, overlain by a later Neolithic inhumation, followed by Bronze Age graves. Dating such sequences as these is essential if we are to understand and illuminate cultural changes over time.  (Photo courtesy of Professor Charles Higham.)

The prehistorian’s task to return extinct human societies from oblivion has always confronted the dilemma of measuring time. Southeast Asia and Southern China is a region central to identifying how civilizations emerged ultimately from bands of hunters and gatherers. Yet the essential chronological scaffolding has not been defined because previous radiocarbon methods have been flawed.

This research will lay the foundations for an accurate overall chronology that charts the major transitions: the Neolithic revolution, the adoption of bronze casting, the development of complex chiefdoms, and finally, the origins of the civilizations. It has been made possible by a radiocarbon dating revolution that is only now opening unprecedented possibilities for the archaeologist. It involves the ultrafiltration pre-treatment of samples of bone, linked to the Bayesian analysis of the resulting determinations. Where formerly, prehistorians were hamstrung by dates with a wide margin of error at best, it is now possible to track cultural changes with almost a generational precision.

This research was supported by the Royal Society of New Zealand's Marsden Fund.

This book describes excavations on the Iron Age site of Non Ban Jak, Northeast Thailand. The authors investigate the origins of social inequality that laid the foundations for the origins of early states. The first chapter provides an introduction to the chronology of the site.