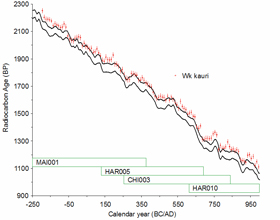 14C measurements from dendrochronologically-dated New Zealand kauri; overlain by the Northern hemisphere calibration curve (IntCal09). The tree-ring periods covered by the 4 trees utilized in this study are also shown.

Radiocarbon (or 14C) dating is the most widely used tool for helping to define geological, palaeoenvironmental and archaeological events that have shaped the last 60,000 years. For example in New Zealand, 14C dates on wood and peat trace the spread or contraction of forests and glacial advances and retreats in response to sometimes-abrupt global climate change; marine shell dates affix the development of beach ridges, estuaries and harbours formed as a result of sea-level rise and fall; charcoal dates measure the tempo and extent of volcanic eruptives and associated volcanic hazard; and midden, bone and pollen dates mark the arrival and dispersion of humans and their impact upon the environment.

The atmospheric 14C concentration has varied through time due to cosmic ray fluctuations. This means that 14C dates do not equate directly with calendar time and therefore must be corrected using a calibration curve (constructed by 14C dating of samples of known calendar age). The material of choice for construction of a calibration curve is wood whose calendar age has been determined precisely by tree ring counting (dendrochronology). What is less widely known is that Southern Hemisphere samples have a lower 14C content than contemporaneous Northern Hemisphere material – referred to as the 14C interhemispheric offset. Early studies suggested a constant offset but recent research led by Waikato's own Dr Alan Hogg has demonstrated that over the last 2200 years the offset in fact varies. This obviously has important ramifications for any Southern Hemisphere carbon dating, particularly for studies of climate change, the timing of natural disasters and anthropogenic effects.