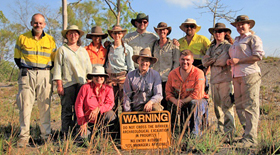 One of Waikato's resident radiocarbon experts, Dr Fiona Petchey, is collaborating with researchers from universities in Australia, the UK and New Zealand as part of the Weipa Archaeological Research Program (WARP). The archaeological record in this region of the Cape York Peninsula, Australia comprises one of the world's largest intact concentrations of estuarine shell mounds. Once a year Dr Petchey visits Weipa to sample the mounds for radiocarbon dating.

The project uses temporal information from Bayesian statistical analysis of the radiocarbon dates in combination with survey and excavation of the shell mounds, and mapping the geomorphological evolution of shorelines to investigate the spatial and temporal variability along the north Embley River, specifically the shell mounds along the coastal fringe. Ultimately, the knowledge gained will able us to determine how people in the past responded to environmental change, particularly sea level change that affect the availability of food resources like shellfish.

For more information on the research being undertaken, visit the Weipa Archaeology website.