One of the leading scientists in his field, Dr Alan Hogg, of the Waikato Radiocarbon Laboratory, is the lead author of a paper that provides a definitive calendar age for the powerful Taupo eruption that occurred about 1,800 years ago.

Taupo volcano in central North Island, New Zealand, is the most frequently active and productive rhyolite volcano on Earth. Its latest explosive activity about 1800 years ago generated the spectacular Taupo eruption, the most violent eruption known in the world in the last 5,000 years. The Taupo eruption is a key event for the international volcanological community because the resultant deposits, well preserved and easily accessible, have been the subject of intense study in the fields of physical volcanology, volcanic hazard analysis, and volcanic petrology.

Previously suggested calendar ages for the eruption included AD 181 (ice core records) and AD 186 (ancient Roman and Chinese historical records) have been shown to be incorrect. Dr Hogg used 14C wiggle matching of 25 sequential 14C dates from trees excavated from the Pureroa buried forest, killed by the eruption, to obtain an age of AD 232 ± 10yrs. 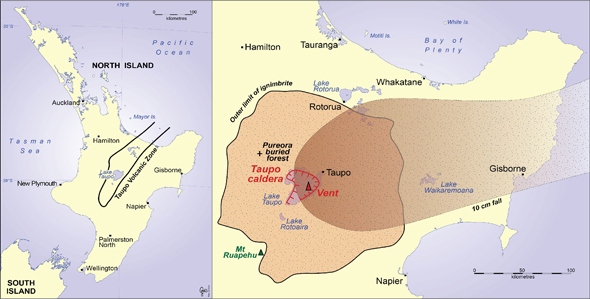 Distribution of Taupo eruption ignimbrite and tephra-fall deposits. The location of the Pureora buried forest containing logs used for dating is shown in the map on the right.